All forms of child sexual abuse (CSA) are a profound violation of the human rights of children. CSA is a crime under Australian law and an extreme transgression of trust, duty of care and power by perpetrators. The rights violations that define CSA are critically connected to the deleterious behavioural and psychological health consequences that ensue.

Rates of CSA are difficult to gauge accurately given the clandestine, sensitive and criminal nature of the sexual abuse to which children are exposed. Perpetrators of CSA are often close to the victim, such as fathers, uncles, teachers, caregivers and other trusted members of the community (Finkelhor, Hammer & Sedlak, 2008). CSA often goes undisclosed and unreported to professionals or adults for many complex reasons, including fear of punishment and retaliation by the perpetrator, as well as the stigma and shame associated with this type of abuse (Priebe & Svedin, 2008).

A global meta-analysis of child sexual abuse prevalence figures found self-reported CSA ranged from 164-197 in every 1,000 girls and 66-88 per 1,000 boys (Stoltenborgh, van Ijzendoorn, Euser, & Bakermans-Kranenburg, 2011). In Australia, Fleming (1997) used a community sample of 710 women randomly selected from the Australian electoral roll and found that 20 per cent of the sample reported experiencing CSA involving contact. Another national survey involving both men and women (Najman, Dunne, Purdie, Boyle, & Coxeter, 2005) reported a higher prevalence of CSA, with more than one third of women and approximately one sixth of men reporting a history of CSA. A more recent study in Victoria (Moore et al., 2010) reported a prevalence rate of 17 per cent for any type of CSA for girls and seven per cent for boys when they took part in the study during adolescence. Both Australian studies involving community samples of women or girls and men or boys indicate that girls are two or more times more likely to experience CSA than boys.

A significant body of research has demonstrated that the experience of CSA can exert long-lasting effects on brain development, psychological and social functioning, self-esteem, mental health, personality, sleep, health risk behaviours including substance use, self-harm and life expectancy. CSA often co-occurs with physical and emotional abuse and other negative and stressful childhood experiences that independently predict poor mental and physical health outcomes in adult life.

A systematic review and meta-analysis of studies published between 1980 and 2008 (Chen et al., 2010) found that a history of sexual abuse including child sexual abuse was related to significantly increased odds of a lifetime diagnosis of several different psychiatric disorders, including anxiety disorders, depression, eating disorders, posttraumatic stress disorder (PTSD), sleep disorders and suicide. A particularly strong link between CSA and subsequent PTSD has been found.

Although the diagnosis of PTSD may be appropriate for those who have been exposed to relatively circumscribed CSA, Herman (1992) argued more than two decades ago that this diagnosis does not adequately capture the psychological responses of people who are repeatedly traumatised over a long period of time, experience subsequent re-victimisation in adolescence or adult life and typically display multiple symptoms of psychological distress and high levels of psychiatric co-morbidity. For survivors of this kind of CSA, Herman (1992) proposed the expanded diagnostic concept of complex PTSD on the grounds that it was better able to accurately capture the complex psychological sequelae of prolonged, repeated trauma.

Survivors of CSA face a significantly increased risk of suicide and a higher prevalence of suicide attempts and ideation. An Australian follow-up study (Plunkett et al., 2001) of young people who had experienced CSA compared with those who had not, reported that those with a CSA history had a suicide rate 10.7-13.0 times the national rate. Furthermore, 32 per cent of those sexually abused as children had attempted suicide and 43 per cent had thought about suicide. None of the non-abused participants had completed suicide.

A more recent Australian study confirms and extends this finding. Cutajar and colleagues (2010) conducted a cohort study of 2,759 victims of CSA by linking forensic records from the Victorian Institute of Forensic Medicine between 1964 and 1995 to coronial records up to 44 years later. They found that female sexual abuse victims had 40 times higher risk of suicide and 88 times higher risk of fatal overdose than the rates in the general population. Interestingly these rates were even higher than those for males, in contrast to the usual gender pattern for suicide. The respective rates for males were 14 times and 38 times higher than those in the general population.

While victims/survivors of CSA face greatly increased risks of poor mental health in adult life, a significant minority do not go on to develop psychological disorders (Saunders, Kilpatrick, Hanson, Resnick, & Walker, 1999). Broadly, two approaches to explaining this finding have informed research: differences in the nature of the abuse that has taken place; and post-abuse factors that positively mediate or intervene in the development of negative long-term mental health outcomes.

Nature of the sexual abuse

The likelihood of experiencing severe, negative mental health outcomes in adult life as the result of CSA is increased by several abuse-specific characteristics. Large scale epidemiological studies have consistently documented that forced penetrative sex, multiple perpetrators, abuse by a relative, and a long duration of CSA (e.g., more than a year) predict more severe psychiatric disturbance and a higher likelihood of being an in-patient in a psychiatric facility in adult life.

More than 20 years ago, Pribor and Dinwiddie (1992) investigated different types of CSA of increasing severity and found that incest victims had a significantly increased lifetime prevalence rate for seven psychological disorders including agoraphobia, alcohol abuse or dependence, depression, panic disorder, PTSD, simple phobia and social phobia. Bulik, Prescott and Kendler (2001) also confirmed that a higher risk for the development of psychiatric and substance use disorders was associated with certain characteristics of the abuse, including attempted or completed intercourse, the use of force or threats and abuse by a relative. More severe and chronic abuse which starts at an early age has also been reported to increase the risk of developing symptoms of dissociation.

Certain factors, both negative and positive, are likely to intervene after CSA has taken place and to mediate adult mental health outcomes.

Delay in the disclosure of CSA is linked inevitably with other delays, all of which are harmful to the child. These include delay in putting in place adequate means to protect the child from further victimisation, delay in the child receiving meaningful assistance including necessary psychological and physical health care, and delay in redress and justice for the victim. Without disclosure, negative health outcomes are more likely to proliferate and compound. Conversely, disclosure within one month of sexual assault occurring is associated with a significantly lower risk of subsequent psychosocial difficulties in adult life including lower rates of PTSD and major depressive episodes (Ruggiero et al., 2004).

Yet experiences of disclosure are not uniform and whether they are positive or negative depends on the reactions of the person to whom the CSA is disclosed. Unfortunately, negative reactions to disclosure are common, constitute secondary traumatisation and are associated with poorer adult psychological outcomes (Ullman, 2007). Such reactions include not being believed, being blamed and judged, or punished and not supported, all of which can compound the impact of the original abuse and further increase the risk of psychological distress including increased symptoms of PTSD, particularly when the perpetrator is a relative.

Specific characteristics of disclosure appear to be protective against the development of psychiatric disorders. This finding highlights the importance of social support in concert with effective action by the person in whom the child confides. The degree to which someone is affected is likely to reflect various indicators of the severity of the abuse as well as countervailing protective factors such as the strength of family relationships and the survivor’s self-esteem. One such factor is a warm and supportive relationship with a non-offending parent, which is strongly associated with resilience following CSA and lower levels of abuse-related stress.

Appointments by booking only

Ghosts of fences past by Kim de Vahl Baker 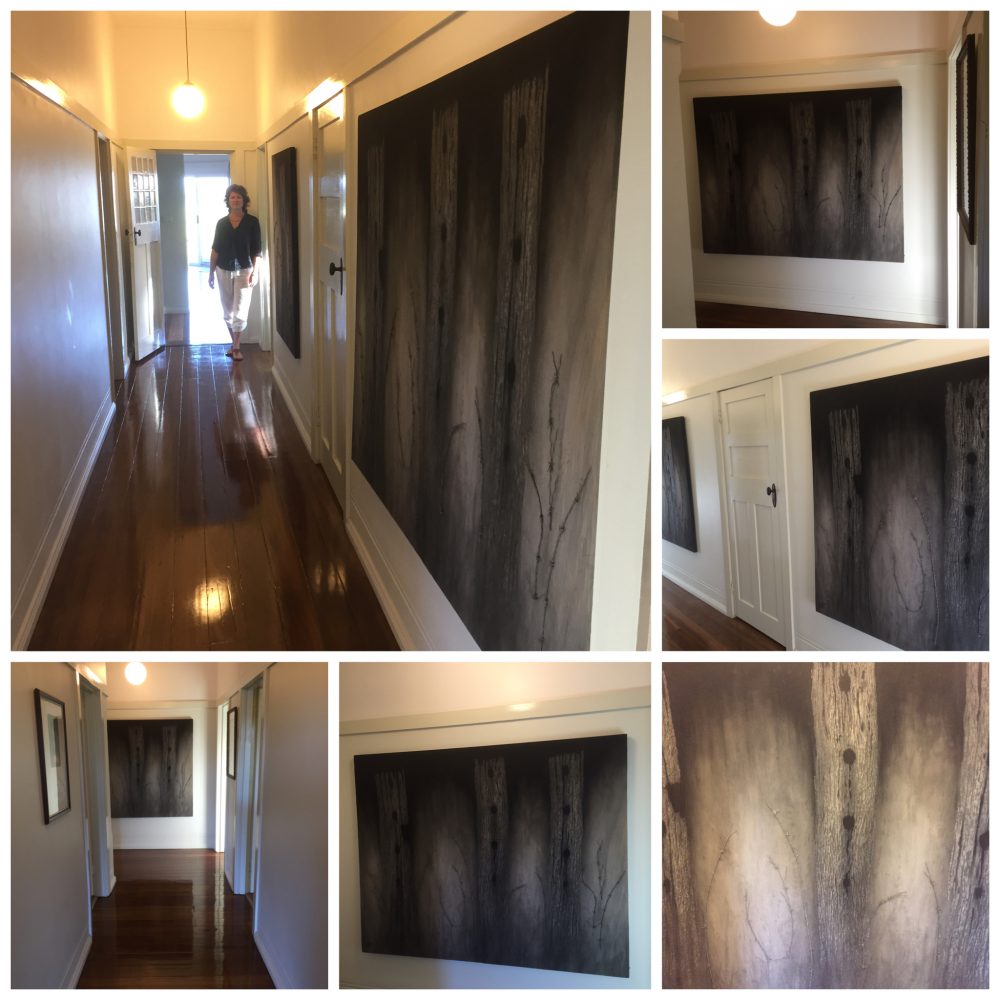